This Tech Note explores hybrid drive systems in sailing boats. It is a significant discussion for smaller sailing vessels as the hybrid market is dominated by much larger systems that do not seem to scale down for smaller boats in the 20-250 kW power range, and in particular the 20-60kW saildrive equipped sailing boats.

We all recall the early days of the electric vehicle when range anxiety dominated conversations; What would I do if my EV runs flat?, How will I carry extra ‘fuel’ to ‘refill’ my car? How long will I have to wait to charge my EV? The logic of course that tended to be overlooked was that around 90% of trips were less than 40 km and charging an EV would become more like the way we manage the charging of our mobile devices, which now occurs quite routinely.

At this time there was also talk of range extenders for electric vehicles which was an attempt to satisfy the range anxiety, however this technology really did not become mainstream as it involved all the elements of an internal combustion engine – which defeated the goals of the relative simplicity and efficiency of battery EV’s. Instead, battery technologies advanced and provided vehicle range comparable to that of fossil fuel based vehicles and pure electric vehicles are becoming accepted.

A few manufacturers in the automotive sector boldly released hybrid vehicles that have certainly proven themselves, however it has been said that automotive hybrid technologies is a ‘transitional technology step’ that ‘brings the worst of both technologies together in one platform’ resulting in a more complex drivetrain. This is being confirmed with the vehicles coming onto the market as pure electric.

Whilst the range anxiety and battery charging are largely being resolved for terrestrial electric vehicle platforms, the marine sector has a genuine requirement for hybrid systems in order to both; charge batteries, as well as provide for extended motoring. For leisure vessels that are used for day sailing and are moored at a marina with shore power available, this is less of a concern as battery capacity can easily accommodate the energy demands of enjoying being on the water for a day or two. However, for longer passages, and the potential requirement for extended motoring, hybrid solutions will be required.

Broadly speaking then, this requirement for a hybrid system has two main components;

1) a requirement for extended motoring – motoring beyond the capacity of the battery storage, and

2) a solution for charging both the house and traction batteries when shore power is not available.

The requirement for a solution to extended motoring on a battery electric sailing vessel is clear. Once the batteries are exhausted there is a need to power the propulsion system and maintain the energy budget on the boat. There are a few options currently emerging such as hydrogen as a fuel source, however, realistically, it is likely that traditional diesel engines will continue to fulfill the interim role of secondary power source as the sector transitions to low carbon operations. This configuration will then allow the electric motor to become the primary propulsion power source for the vessel.

Facilitating the transition away from fossil fuels to low carbon operations is vital, so there is also strong argument to utilise the existing sunk costs of diesel engine as a way to improve the uptake of electric systems by reducing the cost barrier of transitioning away from primary propulsion systems that rely on fossil fuels.

Solar and Wind are currently the ‘go-to’ clean technologies for generating useable amounts of power for the low voltage ‘house’ batteries. This is usually supplemented by the alternator on a diesel system or a small dedicated generator. This has worked reasonably well for some time, however, there is a clear trend for increasing energy demand on boats due to the increased uptake of electric devices and equipment which will require additional energy, which in turn translates into the need for more generation capacity. This trend is also a driver to lift house voltages up from 12 to 48 VDC (see TechNote #3).

The adoption of lithium batteries that are replacing lead acid as house storage provide larger storage capacity, which caters for the increasing energy demand. Lithium batteries will also accommodate higher charging rates, which has the potential to substantially reduce charging times,

The inclusion of an electric propulsion driveline also includes traction batteries to provide energy for the electric motor. These batteries are likely to be at a higher voltage than house batteries and substantially higher capacity. Charging the traction batteries of sailboats with solar, wind or a diesel alternator are simply not feasible options due to the higher voltage and much higher capacity, which  is likely to overwhelm conventional approaches to battery charging.

When away from shore power the current options for charging traction batteries are really the more traditional diesel engine coupled to a dedicated generator. It is important to note that ‘smart’ electric propulsion motors are equally good generators. Switching from propulsion power to generator in these motors is achieved digitally through the motor controller. This is how regenerative braking occurs in electric vehicles. The benefit with this is that the motor operating in either power or generator modes is sized correctly for the traction batteries. Using the electric motor as a generator also has the advantage of not requiring additional equipment for power generation, which has the weight advantage. For these reasons, hydrogeneration will play an ever increasing role in charging the traction batteries in sailing vessels as this is a built-in feature of many electric propulsion systems. Hydrogeneration is a proven, robust technology that has arisen in the automotive sector and certainly has the capacity to deliver far more energy from an electric propulsion system while under sail than solar or wind combined.

There has been substantial work on very large hybrid drivelines but few products are available in the 20-250 kW range, and even less for saildrive systems. The challenge for this range of sailing vessels is to provide a lightweight, ultra-compact, reliable, economic, energy efficient solution.

From the above we can logically conclude that the current solution for a hybrid drive (diesel/electric) involves the use of both diesel and electric systems in an integrated system then the following modes of operation must be able to be achieved;

The above modes in an integrated solution provides both reliability and redundancy for a marine system.

The challenge in designing hybrid saildrive systems lies in achieving an energy efficient, lightweight, and ultra-compact system as these smaller sailing boats with power requirements less than 60 kW simply do not have the space nor the ability to carry additional weight. There have been very few attempts to develop a hybrid saildrive however the challenge of ensuring an ultra-compact design as well as the required clutching to achieve the modes of operation appears to have defeated attempts at bringing hybrid saildrives into the mainstream markets.

The relatively open design of a shaft driven sailing boat should lend itself to the development of hybrid drives, however the clutching and digital logic that allows the various modes of operation remains challenging.

An additional complexity in both hybrid saildrive and shaft driven systems relates to the ability of a ‘smart’ hybrid system to optimise the various aspects of the driveline and includes the ability to control the pitch of the propeller (CPP) (see TechNote#3). This technical development is likely to be some time off yet due to the engineering required to control the thrust/hydrogeneration of the propeller blades with the complexity of a hybrid drivetrain. Much of this work is not yet even really being discussed.

Note that M-powered is currently developing a hybrid saildrive that achieves the above objectives in an ultra-compact, bolt-on unit, that utilises the components of the existing diesel saildrive and will be available in 2022.

Please check our White Papers for more detailed information on this and related subjects. 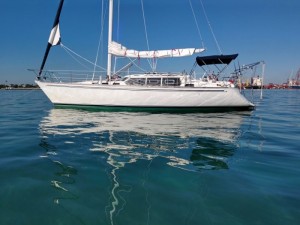 This Tech Note explores hybrid drive systems in sailing boats. It is a significant discussion for smaller sailing vessels as the hybrid market is dominated by much larger systems that do not seem to scale down for smaller boats in the 20-250 kW power range, and in particular the 20-60kW saildrive eq...  read more

Hydrogenation in the marine sector is a relatively new concept that has arisen as part of the electrification of sailing boats. It broadly relates to the generation of electricity by an electric motor by dragging a propeller through the water, causing the motor to spin and creating electrical energy...  read more

Stay Up To Date